There has been some talk about DSC (it was mentioned in SAS’s Annual Report Inland and Offshore) and the possible need for boat owners to redo their Restricted Radiotelephone Operator’s Certificate which would now be called VHF Short Range Certificate and include training in DSC.

So what is DSC and how can it benefit yachties

DSC is a digitised message broadcast on VHF channel 70 designed to alert other stations of a situation of DISTRESS, URGENCY, SAFETY or ROUTINE matters.

Every DSC radio has a unique MMSI number which can be used to call other DSC radios just like a mobile phone.

Your identity is also stored so in the event of an emergency not only will the receiving station know who you are but if your DSC radio is connected to a GPS your position will also be broadcast.

By pressing a single button on your radio an automatic distress call to all DSC equipped stations will be sent. This message will be automatically repeated until stopped by an acknowledgement message.

VHF marine channel 70 is dedicated to DSC and voice calls on this channel are prohibited.

Class D equipment is specifically designed for recreational craft. It provides VHF DSC distress, urgency and safety as well as routine and position polling. The equipment is fitted with both aural and visual alarms to indicate reception of a Distress or urgency message. 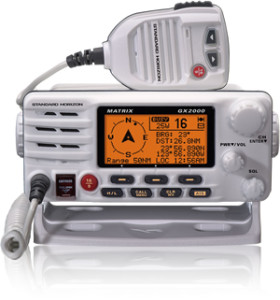 For under R5000 Standard Horizon offers the MATRIX is Class D class DSC VHF with a separate Channel 70 receiver, which allows DSC calls to be received even when listening to traffic on Marine VHF channels.
The DSC DISTRESS function when activated transmits a digital MAYDAY including vessel identification, Latitude / Longitude and time (with GPS connected), to facilitate prompt response. Additional calls that can be made are Individual, All ship – Urgency and Safety, Group, Position report and position request calls.

However before you rush out and spend R5000 of your hard earned cash on a DSC enabled VHF radio and some more bucks on the envisaged new radio course be advised that our coastal radio stations Durban. Port Elizabeth and Cape Town do not at this point monitor VHF DSC channel 70 nor does the NSRI Therefore after hitting the red button your only hope would be a response from another VHF DSC enabled vessel.

So while there is a lot to be said in favour of DSC the good old Mayday on channel 16 would at this point still be your best option.